I'm still chugging along at Beeswox, in fact writing (re-writing, and re-re-writing...) the text has become my primary quarantine pastime. I'm hopeful I'll be able to release it by the end of May.

I'd like to make a couple updates on previous posts about Beeswox.

First, I've modified Verve a bit. To review, it's a pool of points a player spends to activate their character's special abilities. I referred to them as a fixed allowance for "doing an awesome" a number of times per session. But while that mostly worked, it still felt a little abrupt. I don't entirely agree with Dissociated Mechanics criticisms, but Verve was feeling like it suffered from that a bit. Eventually I realized that, if the problem was the artificiality of the hard terminus, then I could just make that line much softer. So now, after a player runs out of Verve, they can still use their abilities, but the referee can optionally impose side effects, call for rolls of the dice, or whatever. I'm much more comfortable with the mechanic now.

Second, I've redone the cover ... twice. While I liked the last design, the dice images on it increasingly struck me as sloppy, and I couldn't verify their copyright permissions. So I stacked every ivory or yellow-toned d6 I had, took a picture with my cheap phone and made a new arrangement on top of the image. I admit it's a little goofy, but that just makes me like it more: 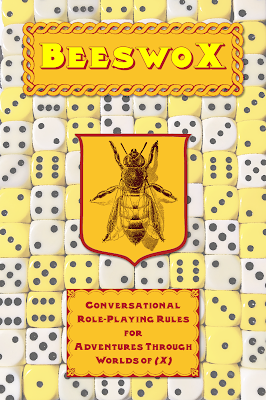 Then, while digging up graphic resources, I found a great color photo in the Flickr Commons. But I didn't have a place for it, until I took it as a prompt to make an alternate minimalist cover: 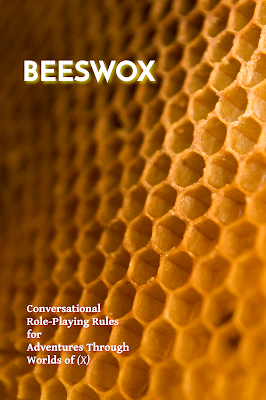 The stark "all-business" contrast to the original cover amuses me, so when it comes time to offer POD, I'll post both versions.
Posted by E.T.Smith at 8:28 PM

Other People Doing More of This Sort of Thing