I've been working on a new project: 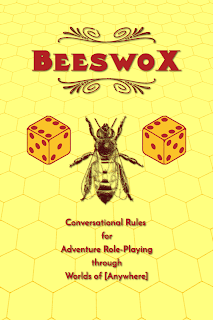 It's a compilation and weaving together of rules and guidelines from the many rules-light "Powered by the Apocalypse" games which followed John Harper's World of Dungeons (a three page take on what Dungeon World would have looked like in it's "original" 1974 version).

I'll have more to say about the game's rules and my goals for the book, but for now I feel like musing on the synergy between rules design and graphic design. Y'see, originally I designed a cover like this: 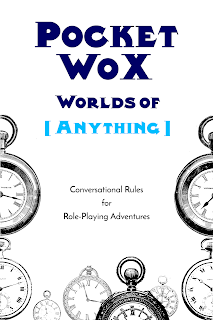 I almost always get sidelined into layout and art long before I finish a text. Common wisdom says this is a sloppy way to work, but increasingly I'm seeing it as a productive expression of my mindset. I'm pretty good with words, but I'm at least as visually oriented, and organizing things graphically helps me understand things I don't catch when they're just text.

In this case, the name "Pocket Wox" at first sounded dashingly clever, with allusions to being a useful tool that's also conveniently portable. But as I fussed trying to figure out how to arrange those watch faces, looking at those precise gearworks prompted me to wonder if that was really what I was going for. Am I really making something meticulous and metal-hard? No, it's subjective and pleasingly malleable. With that insight I took another look at the text and spotted areas where I had gotten overly technical and started rewriting with better understanding of where I was going.

And then I changed the name and started browsing the Flickr Commons for pictures of bees.
Posted by E.T.Smith at 6:31 PM

Other People Doing More of This Sort of Thing